WHEN CAMP ONANDA GIVES HER CALL WE Answer!

Thanks to more folks than can be named, this site is becoming an exciting place to touch base with a very special part of our past. You are all Outstanding Counselors and Campers forever for helping to keep Camp Onanda alive and well in the digital world.

Rebuilding and updating this site is constantly going on so check in often. A major effort to update the site was begun in March 2021. Tell us what you'd like to find here and we'll try to make that happen. Enjoy your visit and keep in touch! 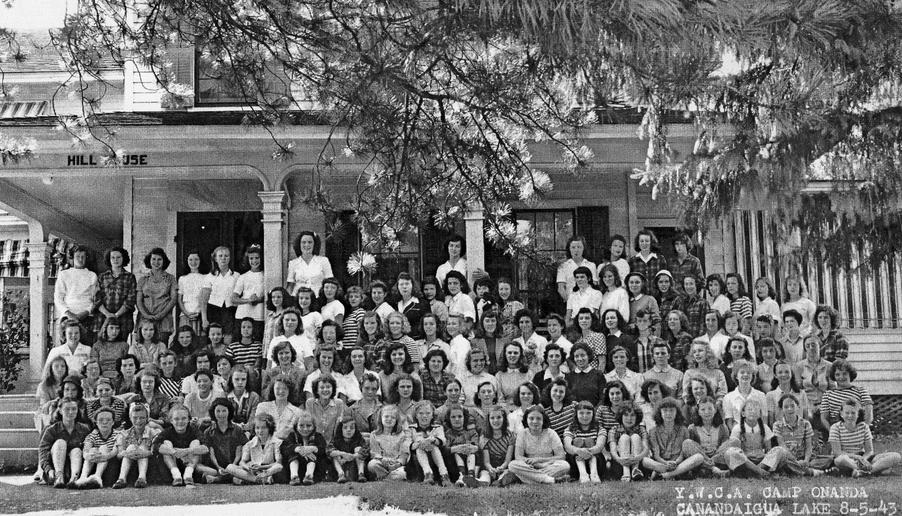 Above are the faces of Camp Onanda in 1943. As with any year, these young gals had come to summer camp for a variety of reasons. As all Onanda brochures did, the camp brochure of 1943 told girls what they would experience at camp and what they needed to bring with them.

However, in 1943 our country was concerned with war, World War II to be exact, and Onanda addressed those concerns as well.

You just can't miss the attitude of camp in 1943! Physical Fitness was a must because, we're told (below), "The ultimate success of any nation depends upon the physical strength of its people." Then, one of the creative activities will be a service project for U.S.O.

Perhaps, this affords us just a wee glimpse into the hearts and minds of what has now been dubbed, "The Greatest Generation." The Y.W.C.A actually started using this area on the west side of Canandaigua Lake in 1906, renting two homes just south of what would become Camp Onanda. It was in 1919 that the Y.W.C.A actually purchased the William L. Foster home and land. It officially became Y.W.C.A Camp Onanda that very summer of 1919. A Brief History of Camp Onanda

Perhaps Slightly Embellished
According to gathered materials, Camp Onanda’s history as a YWCA-owned camp began in 1919 with the purchase of 27 and a half acres on the west shore of Canandaigua Lake. This was the Foster family's home and land. At that time there was a large cottage, a farmhouse, and a tenant house on the grounds.

Imagine, half the cars on the road at that time were Henry Ford’s model Ts and Woodrow Wilson was President of the United States. Only four years earlier transcontinental telephone service between New York City and London had begun. Obviously, there was no television but someone surely had a fine vision when securing this property!

In 1921, the large recreation and dormitory building, known as Babcock Hall, was built on the lakeshore. A craft house was opened in 1928, and in 1931, Wacona, a small dormitory, was erected. Crouch Recreation Hall, built with funds raised by YWCA chapters, was erected in 1938. “Cottage and Abode” were built as staff units during this period.

When pondering “Abode” it’s nearly inconceivable that staff slept there. Have a feeling there was no flush facility, definitely no refrigerator but likely beds very much like the ones future generations would use. Don’t you wonder how many folks slept in “Cottage”... Even with bunk beds it had to be an adventure!

Through the ’30s, the summer season was “bued” (who wrote this?!!!) by adult and junior campers. I think the original author meant that the camp was USED by adult and junior campers. During the Great Depression, large groups of young women from the YWCA’s Leisure Time School spent a week at camp. Since the early ’40s, Onanda had been used exclusively for grade and high school girls in mid-summer and in June and September for adult or teen groups.

Again, try to imagine. Imagine a time when so much of our country is struggling to get bread, let alone pay mortgages or rent. Parents tried hard to shelter their children from the turmoil and pressure. Now, can’t you just see a bunch of kids somehow getting to camp? It had to be the most wonderful time of their young lives. In 1955, the Community Chest approved an expansion and modernization program for Onanda with the purchase of 47 additional acres across West Lake Road. Babcock Hall would be literally cut into three parts. The long southern wing was moved up near the entrance becoming the dining hall. The middle section became Haeho, a camper cabin. The northern wing stayed on the shore to serve as  the boathouse and crafts room. The modernized camp was used for the first time in 1959.

Apparently, it took just four years for Onanda to become more like what we experienced. Just think, by 1959 there were campers going home with worn holes in a pair of shorts. Glen sliding had begun! It seems likely that these campers and counselors blazed the trail for us.

In 1963, the Lowe Memorial Chapel was dedicated and a rifle range was added for teenagers. The most recent additions to the camp were the archery field, rifle range, and playing field on Teen Hill.

In August 1971, Gorham Lodge, with a new dining hall and winterized dormitory accommodations, Ho De Sau Nee (Building in the Middle) with offices and nature center were dedicated.

And, there you have it; from a purchase of some land in 1919 to a wonderful and loved YWCA camp. Ah, but there is, indeed, a “rest of the story.” Sadly, the YWCA could no longer afford Camp Onanda, but her gate did not close. Since 1989, the Town of Canandaigua owns her and tends to her. She kept her name and now families and groups can experience Onanda. Thing is, those who go today will miss the camper and staff shows, bug juice at campfires, skinny dippin’, announcements, flag ceremonies, requisitions, taps, rainy day classes inside, late-night pranks and so many adventures that only campers and counselors of the "real" YWCA Camp Onanda cherish in their memories. After all, it is those experiences and our memories that bring us to this site.

And today, you can visit Onanda Park! Thanks to the town of Canandaigua, you can even rent a cabin and spend a night or week at this special place. Or just spend a day there and walk the glen, swim, and just let the memories flow.

The image of Hill House (above) was taken around 1922 by photographer Albert R. Stone (use of Stone's Images on this site was paid to the RMSC). Sunny (Cyndi Cash Collins) found this shot and others some years ago on the internet. She purchased them and shares them with us here. Thanks, Cyndi!

By the Way...
Folks have often asked if we know who the camp directors have been over Camp Onanda's history. From research and Skip's saved records, below is a list that is the best we can amass.

After you've read the next part of the camp history (found in the drop-down window under the HOME page), if other historic sorts of questions pop into you're thinking, send those questions our way. We'll try to find the answer for you.