A More Detailed History
Much of the following has been revised from the information compiled and presented for the CIT program offered at Onanda. (Thank you, Kammy, for saving so much!)

How It All Began

Long, long ago the Y.W.C.A. was ever thinking of ways to make the lives of women more enriched.

Well before the Rochester Y.W.C.A. began to develop summer camps for girls, it first opened boarding homes and vacation homes for employed girls. The boarding homes provided for girls from rural areas who came to work in the city’s industry. Then, because the Y.W.C.A. was concerned that young women have a place for “rest, recreation and healthful outdoor living during the summer months,” they purchased and rented vacation homes for that healthy change we all need from daily routines.

The earliest mention of a “Vacation House” appears in 1899 records. Forest Lawn, on Lake Ontario, was rent-free and could accommodate twelve employed young women. Imagine being able to get away from the city and stay a few days along the shores of a relatively unpopulated lake. Wow, rent-free! In 1900, a rental Vacation House on Irondequoit Bay was added to the possible “getaway.” The rental fee is not listed but one can assume that it was marginal in keeping with the Y.W.C.A.’s desire to make healthy and fun experiences happen for women. Then, there it was. In 1909, a Vacation House at Point Rochester on Canandaigua Lake appears in the records. This, of course, is the very beginnings of the Camp Onanda we so enjoyed.

Likely because it wasn’t quite as accessible as the property purchased in 1912 near Sea Breeze on Lake Ontario, Onanda would remain a quiet, rental Vacation House for several years. From 1912 to 1931, the Y.W.C.A. maintained the Lake Ontario property calling it Camp Wacona (meaning “bright star” in the native tongue of the Seneca Indians). Camp Wacona was first a summer rest camp for women but was also used by other groups during the offseason. In July of 1931, it was used as a service camp for groups of underprivileged children and adults. Camp Wacona was sold in 1931 with the focus now on children, young girls, and... Camp Onanda.

Ah, but let’s begin at the beginning. That would be when Onanda was a Y.W.C.A.-owned camp, Vacation House, for employed women. It would begin in 1919 with the purchase of 27 and half acres of waterfront property eight miles down the West Lake Road from the city of Canandaigua.

The purchase was made possible by a group called The Onanda Association. This group raised $1,000 and Mrs. Agnes Hill made a generous, personal gift which allowed the Y.W.C.A. to make up the difference for securing the property and buildings. At this time there were three buildings; a large cottage with porches all around; a farmhouse; a tenant house. The farmhouse (eventually named for Agnes Hill) was the 1909 rental Vacation House.

Yep, right from 1912, this property was known as Onanda, which was simply carried over with the purchase by the Y.W.C.A. Miss Mary Moulthrop, one of the early leaders of the rented Vacation House, obtained the word from Seneca Indians she knew. The Indians suggested the area be called Onanda because of the many fir trees there. Then too, the fir represented strength and simplicity to the Senecas so what name could better represent a retreat for working women? Miss Mary started using the name and it stays attached to that wonderful place to this day.

In 1920, Camp Onanda was described in Board of Directors’ minutes as “a dream half fulfilled.” They had BIG plans and in 1921 Babcock Hall (Mrs. C. H. Babcock, a former member of the Board and chairman of the Health Education Committee, gave the finances needed for construction) rose up on the lakeshore frontage. It didn’t come easily either. When it was nearly completed it was reduced to ashes by fire. Like a phoenix though, it was rebuilt amid the ashes. This huge recreation and dormitory building became the main housing unit of the camp and was well used until 1959.

Meanwhile, back in 1928, Anna D. Hubbell made a wonderful gift of a Craft House to the camp. It was so needed and dear Anna heard the call.

From the time it was established as a Y.W.C.A. camp, Y.W.C.A. Chapters have been generous donors to Onanda, assigning funds in their annual budget to equip and repair the camp. Way back in 1931, records show that these Chapters purchased a “station wagon” along with other major items. Can you imagine a 1931 station wagon?! Also in 1931, the property on Lake Ontario was sold for $3,000 and that money was used to build a new dormitory, Wacona, at Onanda.

Then Cottage was built as a housing unit for staff and Abode was built to provide sleeping quarters for husbands and wives who might need overnight housing. Hummmmmmmmmmmm.... will reserve comment.

A long-felt need was met when, in 1938, Crouch Recreation Hall was erected and dedicated. The cost of Crouch is recorded at $4,000. It took the Chapters three years to raise this money. Back in 1912, Mrs. Frank P. Crouch was chairman of the Camp Committee and worked with the staff in charge of the rented property on Canandaigua Lake. Because of her unending desire to provide this camp for girls and women, the hall was named for her.

Throughout the 1930s, the summer season at Camp Onanda was enjoyed by both adults and junior campers. A seven-week period was assigned for younger girls and one or two weeks for adult groups. During the depression years, large groups of young women from the Leisure Time School (all of whom were unemployed or in poorly paying jobs), came to Onanda for a week’s stay under the leadership of the Young Adult Department. These young women attempted to raise money for their week at camp but if they didn’t reach the needed goal the deficit was covered by the Y.W.C.A.

In 1938, the year Crouch was opened for use, additional dining space was provided in Hill House. Screened in porches were the answer (as you might have figured out, these porches eventually became Anekul and Wequash). The infirmary quarters, also in Hill House, were improved then too.

Prior to 1955, Camp Onanda had the following buildings: Babcock, Crouch, Hill House, Wacona, Abode, Cottage, Hubbell Craft Shop, Little House, and Wayside. Wayside was used for many years as sleeping quarters for camp staff. In 1961, it again became the year-round residence for the camp caretaker. For at least 15 years now, Onanda hosted an eight-week summer camp exclusively for grade school and high school girls. June and September were set aside for other groups but Onanda was now better known as a girls’ camp.

Because Onanda now had waiting lists of girls wanting to attend summer camp, and the population of this age group was increasing, the Y.W.C.A. asked for approval from the Community Chest for a campaign to modernize and expand Camp Onanda. Just before this campaign, in 1954, the Board of Trustees for the camp had approved the purchase of 47 acres, known as the Domm property, on the far side of West Lake Road, adjoining the glen property. So, Teen Hill was just a lovely, quiet hillside with a glorious view of the lake in 1954 when it became part of Camp Onanda. My, how that would change!!

Modernization didn’t mean television in heated cabins. No, Onanda kept its wonderful camp atmosphere but improved the flow of things. First, Babcock Hall was outmoded and in need of major repair. So, it was replaced by cabin-living for all the campers. Cabins and wash houses sprung up on Lower Camp and the new Teen Hill.

Babcock Hall was not lost though! That huge hall served Onanda for years! It was cut into three useable buildings. Half of it was moved up near the road to serve as a dining hall. This location also made it much easier for needed deliveries and services to happen. Part of Babcock was left on the waterfront and became the well-used boathouse. The lovely front section was saved and placed further from the shore to be used as a cabin for campers and became known as Haeho. Absolutely nothing was wasted. The folks on the Boards and committees for Camp Onanda were frugal and caring.

The modernized Camp Onanda was in use for the first time in the summer of 1959 though partially completed. Its entire completion was celebrated on 22 June 1960 with an outing and tour of Onanda attended by the Campaign Committee, Trustees and their wives, Board of Directors and their husbands, staff, and those who had a part in planning and construction.

At its peak, the total camp capacity was increased from about 100 girls per session to 154. In 1967 the total attendance was 638 girls, from 4th - 12th grades, for an eight-week season. Things were really rolling along. The goals and desires of the Y.W.C.A. to provide for women were being met. All was well and settled, right? Wrong...

Because Onanda became a lovely place for other responsible groups to use, consideration for winterizing some building began to be imagined. Church groups held retreats on weekends throughout the year, cheerleading camp was held at Onanda for years and all sorts of small groups might enjoy the camp if it was accessible during the colder seasons. In the early ‘70s, another major project began. The dining hall (remember that this building was used by all and had been around since 1921 when it was part of the larger Babcock Hall) was modernized and winterized. Hill House was just too needy to be repaired so... it was taken down entirely and a new office, storage area and nature room grew in its place. Again no waste was allowed. Anekul and Wequash (used as cabins and attached to Hill House; these were the screened porches used so many years ago as dining areas) were saved and relocated on lower camp. Anekul went down near the boathouse and Wequash was moved near Haeho.

Camp Onanda continued to offer girls the summer memories we hold dear for several more years. The leadership changed and perhaps the general allure of summer camp. In 1989, Camp Onanda was turned over, officially, to the Town of Canandaigua. The Y.W.C.A. felt it no longer could afford the camp but in wisely selling it to the Town of Canandaigua, it would still be enjoyed by groups of people. Today Camp Onanda is called Onanda Park. Families and groups can rent the cabins for overnights, spend a day swimming, hiking up the glen, and just absorbing the feel of nature. Laughter and footfalls can still be heard at Onanda but it’s missing flag raising and lowering, bug juice, camper shows, all camp cookouts, candlelight ceremonies, campfires, and all those rare and wonderful things that were truly and only Camp Onanda. 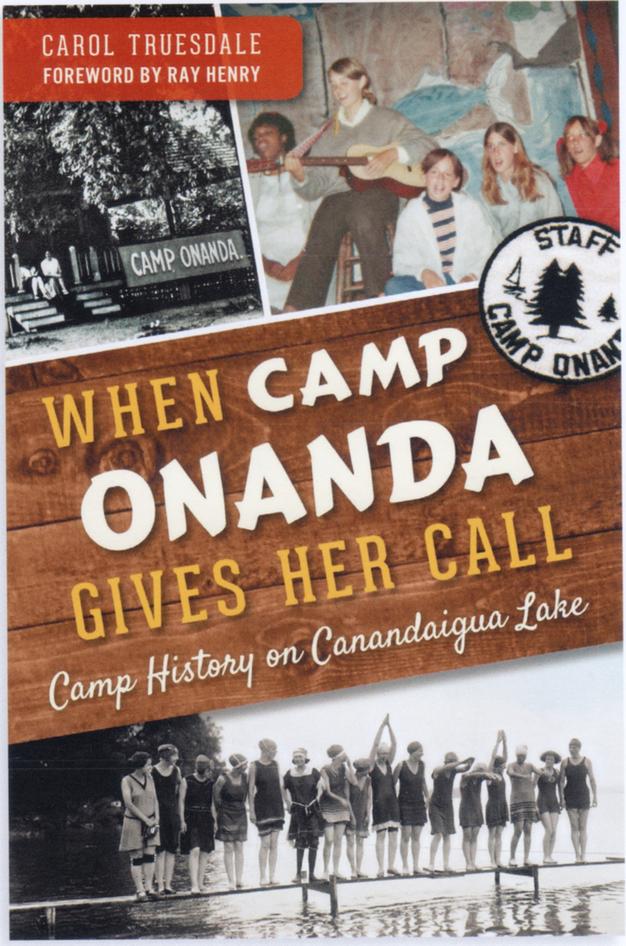